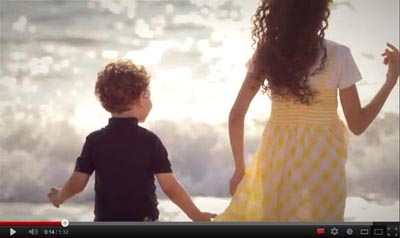 From the Temple Institute, in the Holy City of Yerushalayim

The Children are Ready. If you have not yet watched this 90 second video, do so before you proceed!

What do we wish for our children? We wish them health and happiness, of course. We pray that they will adhere to the path that we have tried to set before them, to always walk in truth and in the light of Torah. We hope that they will always be there for one another, through thick and thin, good times and bad.

Moshe rabbenu – Moses our master – was born into the darkest days of the Egyptian exile. He was a contemporary of the nation that he would eventually lead out of servitude. He was their prophet, their lawgiver and their savior. But nevertheless, in spite of his own unique personal history and status, he was also one of them. When Israel approached him, whether with a question, or out of desperation for food or water, or resentful of their wanderings, or in an act of rebellion, they did so with a certain measure of familiarity. But Moshe outlived his generation, and the children of Israel who are about to enter the land are not of Moshe’s generation. He is still for them their prophet, their lawgiver and their savior. But he is also much more than that. Moshe, to the generation that would soon cross the Jordan and inherit the land, is a father. We can sense the subtle yet poignant shift in how Israel approaches Moshe with their questions and in the nature of his response.

We witness this in this week’s Torah reading of Matot-Masei, when, in the aftermath of the war with Midian, (in which Israel came into possession of the vast territory previously held by Midian), the children of Reuven and Gad approach Moshe and gingerly propose: “‘The land that HaShem struck down before the congregation of Israel is a land for livestock, and your servants have livestock.’ Theysaid, ‘If it pleases you, let this land be given to your servants as a heritage; do not take us across the Jordan.'” (Numbers 32:4) Horrified, Moshe counters, “Shall your brethren go to war while you stay here?” (ibid 32:6) Moshe will not countenance that his children, the children of Israel, will not remain united in purpose, will not be there for one another. Reuven and Gad attempt to reassure him by promising that once they have settled the land they will join their brethren as they cross the river and take up arms in order to gain possession of their inheritance. But in their commitment, which Moshe does accept, he finds more reason for concern:  “We will build sheepfolds for our livestock here and cities for our children.”(ibid 32:16) Our sages point out that by noting their livestock before their children they have unwittingly revealed a faulty set of priorities. Moshe is comforted by their commitment to stand with their brothers, but as a father he is disappointed by their lack of total commitment to their own children.

Previously Moshe had been approached by the five daughters of Tzelaphchad: “‘Our father died in the desert, but he was not in the assembly that banded together against HaShem in Korach’s assembly, but he died for his own sin, and he had no son. Why should our father’s name be eliminated from his family because he had no son? Give us a portion along with our father’s brothers.'” (ibid 27:3-4) How gratified Moshe must have been! The five sisters banded together as one for the holy purpose of inheriting the land that G-d had promised them.They spoke respectfully of their father and wished to honor his name. His “sin” which the daughters mention may be evidence that he was not a perfectly righteous individual, but his daughters’ behavior is incontrovertible evidence that he was a very good father. Perhaps because of the great comfort that their righteous behavior afforded Moshe, they are mentioned again at the very conclusion to the book of Numbers.

Moshe, the father to his people, is troubled by Reuven and Gad’s seeming lack of commitment to the way of Torah, (by choosing to settle outside the land), their questionable commitment to their brothers, and their casual attitude toward their own children. At the same time he is consoled by the five daughters’ respect for their father Tzelaphchad, and by their burning desire to fulfill G-d’s promise in the land. Today we enter the Hebrew month of Av, also known as Menachem Av, literally, the consoling father. The month of Av has forever been marked, first by the sin of the spies, whose evil report on the land was delivered on the 9th of Av, and later by the destruction of both the first and second Holy Temples on this same day. Yet despite the disastrous nature of events that have occurred during the month, from which we have not yet shaken free, Menachem Av is unparalleled in its expression of love, and trust and confidence that our Father has in us.

The first Holy Temple, we are taught, was destroyed as a result of Israel’s committing three cardinal sins: idolatry, the shedding of blood and sexual impropriety. In short, Israel failed to stay true to the Torah that G-d had blessed them with. The Second Holy Temple, we are told, was destroyed, not as a result of Israel’s lack of commitment toTorah. On the contrary, Israel was zealous in its love for Torah. The second Temple was destroyed as a result of Israel’s lack of unity, lack of brotherly love. Yet, the month of Menachem Av is the very embodiment of G-d’s love for His children. Even though we have sinned against Him, not once, but twice, even though we have disappointed Him, He is consoling us! The very same month in which our behavior caused the most cataclysmic and painful rift between Israel and G-d, is nevertheless the month in which G-d comforts us, telling us that everything is going to be alright.

We are currently in the midst of the three weeks of contemplation and reflection over the (continuing) destruction of our Holy Temple. We strive to overcome the mistakes committed by our fathers and we hope and pray that our own children will always be there for one another, and together walk in the way of Torah. When we walk as one in the path of Torah all obstacles fall by the wayside. Together, truly together, we can and will rebuild the Holy Temple. The children are ready.

Tune in to this week’s TempleTalk, as Rabbi Chaim Rabbi Richman and Yitzchak Reuven cry, the beloved country, and also ponder Hillary’s hair and the Jewish problem: Whither American Jewry?

As the book of Numbers draws to a conclusion this week with the reading of the double portions of Matot and Masei, the Rabbi and Yitzchak reflect upon the life lessons we have garnered over the past few weeks in reading and studying Bamidbar… most notably, the profound sense of love for the Land of Israel emanating from G-d Himself, and reverberating throughout the generations, from the daughters of Tzelophchad and on down to the children of our very own generation, whose passion for the Land strengthens their resolve to settle it despite all odds and obstacles.

This week we usher in the month of Menachem Av, the month of the Consoling Father, a time known for Temple destruction and mourning, but waiting to become the time of Temple renewal and rebuilding. It’s up to us,the hosts of Temple Talk remind us, to stop crying and start building…the father is waiting for his children to console him!

The Children Are Ready: This video has changed our lives. We feel it can change yours. Please take one and a half minutes and join us in an experience you will never forget. If you feel the way we do, please share this video with every soul you know who believes that the future begins today.

This week’s all-new Return of Prophecy teaching by Rabbi Avraham Sutton, is entitled, “Chapter 33: The PLACE of the World: Our traditional prayer teaches us how to engage G-d from a multiplicity of perspectives, creating a spiritual ladder that can bring us ever closer to G-d.” Click here to view.

The two Torah portions, Matot and Masei, which conclude the book of Numbers are read together as one. What is the true connection between Matot, which begins with the laws concerning the responsibility of taking upon oneself a vow, and the opening verses of Masei, which describe the journeys of Israel in the wilderness? Taken together, they provide for us a key and a map to our own life’s journey, and shine a light on our own potential. Click here to view Rabbi Richman’s teaching on parashat Matot-Masei (Numbers30:2-36:13).