Imagine this….just picture this….a very beautiful, radiant, and regal 86 year-old courageous woman bursting with emunah and determination leading the daughters of Israel out of slavery…. across the Red Sea with drums and tambourines singing and dancing in praise of HaShem. “She went out and all the women followed her.” Yes, that’s our Miriam. That is why we are having a gathering of Jewish woman from all over Israel on the anniversary of her passing from this world—to honor the life of Miriam HaNavia. This is the Miriam who kept Am Israel going from the time she was a little girl—for 80 years. This is the midwife who saved thousands of male babies and became the midwife of Israel. This is the little girl who loved her baby brother and watched him for seven days on the banks of the Nile River until Batyia, the daughter of Pharaoh, rescued and adopted him against her father’s orders. Her mother Yocheved nursed him. Miriam’s baby brother Moshe grew up to be Moshe Rabbeinu—the teacher and lawgiver and redeemer of Israel, the universal role model for liberation and freedom for all time. Yes, Miriam prophesied that her mother would give birth to the redeemer of Israel when she was six years old, and she was right.

My Hebrew name is Miriam. I never used to like my name. I thought I would have a bitter life because the meaning of Miriam is “bitter waters.” Miriam was born 86 years before liberation. She was born four years before Aaron and six years before Moshe and she was named for the bitter suffering of the Jews in Egypt when the suffering reached its height at her birth. One day I met an American Indian woman named Janet McCloud and she asked me my Hebrew name. I told her I didn’t like my name and she asked why. I told her it meant “bitter waters” and that I didn’t want a bitter life. She exclaimed, “Bitter waters? My, how blessed you are to have the name ‘Miriam.’ Don’t you know it is the bitter waters that heal, not sweet waters?” So then I learned to love my name and to make the name Miriam beautiful through my love for her.

The bitter olive is associated with Miriam whose name comes from mar (bitter) in Hebrew and yam (water), but Miriam also means “mar ram“—to elevate, to make high—so  the bitter olive was pressed into oil. The bitterness was transcended and elevated into olive oil for the Menorah, the Beit HaMikdash, for anointing our kings, lighting Shabbos candles throughout the generations, illuminating our lamps, and for healing. It is also said that singing annuls bitterness, and we all know how Miriam loved to sing and dance.

There is a legend that the Well of Miriam is located between Kever Rachel (wife of Rabbi Akiva} and Kever Meir Baal HaNess in Tiberias. It is written that Miriam wanted it there so Am Israel will always be blessed with water. Why did she bring it to the Kinneret?  Because the Kinneret is shaped like a kinor—a violin.

Like a musical instrument, the Kinneret talks to you. How? With her ever-changing gorgeous colors and magnificent patterns. The Well accompanied Am Israel again when they crossed the Jordan River to Eretz Israel 40 years later. On 10 Nissan, a year to the date that Miriam passed away, the greatest incentive for crossing the Jordan was the fact that Am Israel already crossed the Red Sea without the well, and now they were crossing the Jordan with the Well. The Jordan River flows into the Kinneret. The Midrash states that Miriam’s well was created on the second day of Creation. It is said that this is the same well that Abraham used and that in the merit of his kindness to the three angels who asked him for water, he received entitlement to Miriam’s Well and had it preserved until it would accompany Am Israel in the desert. It is written that in the time of the Geula (Redemption) the well will be situated under the Beit HaMikdash and will irrigate all of Eretz Israel. Torah is compared to water and is associated with Chesed (kindness) and purity “Mayim Chayim”—living, pure, free flowing waters of life. 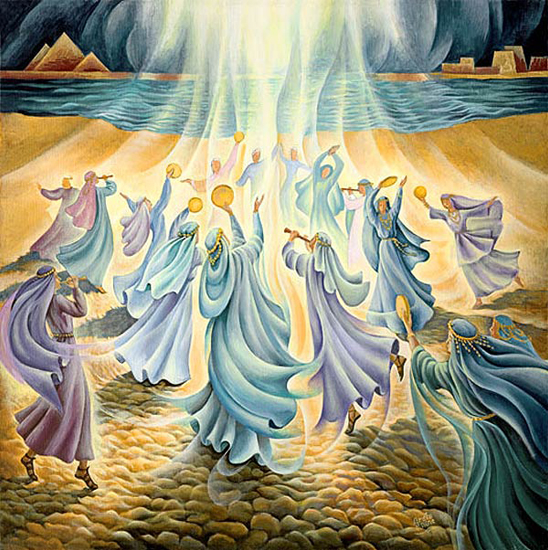 One of the roles of Miriam was to teach and instruct the women. She was the first leader whose mission was to teach the women. She circulated among the women, and by her presence created a holy atmosphere. She instructed them not so much by words but by character–by her actions. When Miriam took the drums they followed her. She didn’t ask them to follow. She went and they followed. Just think about it. It could have been any of us here today: Devorah or Chava Rachel, Tzionna, Joy, Mirele, Debby, Yehudit, Aviva or Joanie, following her into the river bed with Pharoah’s army chasing us with chariots, walls of tumultuous roaring waters piling up on either side. There we were, singing the oldest of all national anthems, “Sing unto HaShem.” All the centuries of bondage in Egypt were lifted. The sound of thundering gushing waters accompanied by drums and tambourines and the beautiful and holy voices of the redeemed women of Israel. She used her great gift of music to elevate her people, to exult over their escape from their enemies, to give them a newly discovered faith and love of HaShem. Miriam knew that it would be easier for “Am Israel” to go through the Red Sea if they danced and sang songs of redemption.

The life of Miriam is a lesson for us all. At the age of six she was already a role model. She helped the Jewish family to continue—to be fruitful and multiply.  She kept Am Israel going. She never gave up hope. She believed in redemption despite adversity. How did she do this?  Her whole life was about uniting the nation. She protected, sustained and nurtured us, just as she protected her baby brother Moshe, and as she worked with her mother as a midwife. She was also called Puah. Her mother was called Shifra. Miriam whispered words of encouragement, prophecy and love to the mothers and babies. She sang to them, cleaned them, embraced and caressed them, gave them hope. Remember that Pharoah issued a decree that the Hebrew wives and husbands must separate, that all baby boys must be killed. But Miriam sent the women out with mirrors to entice their husbands. Her father was the leader of the Jewish people. He separated from his wife. Miriam told him that what he did was worse than Pharoah’s decree because this would mean that baby girls would not be born, and that he was setting a bad example. She told her father he must remarry because his wife will give birth to the future redeemer of Israel, and so he did. The Hebrew midwives did not obey Pharoah’s decrees. Pharoah asked why and Yocheved answered, “Because Hebrew women are not like Egyptian women. They are like animals in birthing.” And little Miriam interjected, “Woe to him who the Lord will Repay.” Miriam at six years old was already the mother of rebellion. She spoke up to Pharoah and made sure that no children were immured.  Miriam is the only woman in the Torah who is called a Prophetess.

Miriam knew that we have to prepare our tambourines…to prepare our redemption. Before we went out of Egypt the women were preparing their drums and tambourines, and baking matzah. “Lechem” (bread) and “machol” (dance) have the same letters. At the same time her mother and Serach, the granddaughter of Jacob, and her brother Moshe were busy searching for the Kever of Yosef in the Nile. They would never leave Egypt without Yosef. Moshe carried the aron of Yosef on his back from the Nile to the Red Sea. Mashiach comes from Miriam. Her father was Amram who was the leader of the Jewish people in Egypt. He was the grandson of Levi, the son of Jacob. Miriam comes from the House of the Kohanim and Kings. She was married to Caleb. Her son was Hur and her grandson was Bezalel who built the Mishkan. What a dynasty! Rebbetzin Tzirra said that the seuda (feast) of Mashiach will be in honor of Miriam because she is the representative of water and the Leviathan is the great fish that we will be privileged to dine on.

So we feel it is time to go to Tiveria and honor Miriam and her Well of Water on her Hillula, on her Yartzeit.  Miriam passed away when she was 126 years old. That is why we have 126 women on the boat on 10 Nissan, 2487, a year to the day when Am Israel crossed the Jordan. Moshe, Aaron and Miriam all left this world within 12 months of each other, each with a kiss from HaShem.