The Legendary Saga of the Sheriff of Tzfat

This week my husband Avraham celebrated his 68th birthday and I want to honor him by sharing the legendary saga of the Sheriff of Tzfat. This story is not just a legend but a true life story of my brave husband Avraham, who knows how to go after what he truly wants. He knows how to make things happen, while others may be wishing things would happen, or complaining that they don’t. He goes on his merry way to bring about his deepest desires with G-d’s help of course. It has been said that when you make aliyah, you can remake yourself in any way you choose. You can decide what you want to do and who you want to become. All it takes is self confidence, patience, persistence and mostly a great sense of humor. My husband has all these rare qualities and he continually blesses my life.

Avraham decided he wanted to be the sheriff of Tzfat and that was that. I believe the longing had its roots in his childhood days, when cowboys and Indians roamed the land and the sheriff, who was always the good guy and hero, ruled.

My husband initially wanted to volunteer with the police while we were living in the Old city of Jerusalem. He was told that since he didn’t speak Hebrew, he wouldn’t be accepted as a volunteer. My jovial husband saw this as nothing more than a minor challenge to be overcome. He made up his mind that he would become a volunteer and he would do whatever it took to see this to fruition.

From the time we decided to make aliyah to the Old City of Jerusalem, he dreamed of being a guardian on the walls of Yerushalayim. It wasn’t an ego thing but a deep longing and a holy desire.  There was no room in his mind for a “no” from the police. So he walked into the station with an alpha male stance, dripping with self-confidence and a big smile, talked to the guys and was accepted as a volunteer. He has the most amazing way of endearing himself and edging his way into your heart, in addition to having a very strong and forceful persona.

Avraham would go every day to see what he could do for the police and often times, he would just sit and wait for an assignment (I think they were testing him). Many times they would ignore him but when he kept showing up day after day with a smile and enthusiasm, they finally asked him, “Why are you coming here every day?” He said, “I want to help you, I want to help my country.” They believed him, due to his persistence, and they began to give him various assignments. As time went on, he began to do more meaningful jobs, including patrolling the walls of Jerusalem at night with an M16 rifle. He has owned and shot guns since he was a boy, when at the age of 9 he got his first BB gun.  One day, he was patrolling with his rifle and he was wearing a white cowboy hat to keep the sun off his face, when one of the young policemen started calling him sheriff. He liked it and the name stuck and all the police started calling him “Sheriff.”

After four years in Jerusalem, we decided to move north to Tzfat in the Galilee, in order to have land, air, quiet and an affordable house, which we decided to build. After the house was finished and we were settling in, Avraham was ready to volunteer with the Tzfat police. He knew the ropes, so to speak, and he makes friends easily, so he went to check out the possibilities. This time he was determined to not only volunteer but to acquire a uniform (which he didn’t have in Jerusalem) and to somehow become the Sheriff of Tzfat. He had his plan all mapped out in his mind. He was accepted once again and had to take a course in Hebrew in order to eventually get a uniform. Once the guys at the station got to know him, they wanted to do whatever they could to help him—Protectzia, it is called.  And so, a year after starting to volunteer, he got his uniform and was very happy.

This achievement was not the norm. In fact, there were many volunteers who had been there for years with no uniform. It was a fight to get the uniform of course, but my husband had acquired all the necessary skills to come out on the winning end. He even has a PHD in pestering…believe me, it’s true! 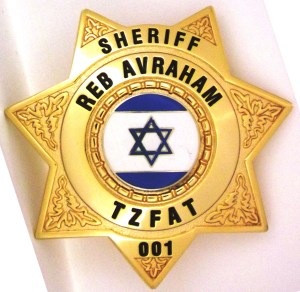 Once Avraham acquired the uniform and looked quite official, he set in motion his next level of advancing his Sheriff identity. He went online and designed himself a badge and had business cards made, with his name and identity as the Sheriff of Tzfat. It is quite beautiful and very real looking and very official looking. In order to have the badge made, the company in America requested identification, so he went ahead and faxed the new business card along with his police I.D. to the online company. I watched the goings on in stunned and shocked amazement. I was a doubting Thomas, so to speak, because I still had that people pleasing, what will people think sickness and it precluded a belief that my husband could actually become the Sheriff of Tzfat, even if it was for pretend. I had not come to the realization of what my husband had come to know, that “We are led by our deepest desires, as long as we have the persistence and patience to make them happen” and we can’t be afraid of looking like a fool in other people’s eyes even if it happens to be your spouse. He wanted to be the sheriff of Tzfat and he somehow knew that the police would see it as an amazing guy thing and they would receive it well and enjoy it too.

The truth is I just didn’t get it! I didn’t understand why it was so important and it would be months later until the truth and meaning of what my husband had accomplished finally hit me with full force.  And so it was, his badge arrived, his cards were ready to go and he even had a baseball cap and shirt made that said Sheriff. He awoke and dressed in uniform, donned his new sheriff hat and with his badge and cards tucked in his shirt pocket, set off to serve and protect—he was the Sheriff of Tzfat.

As I escorted the new sheriff to our door, I gave him a blessing that the station commander would find it as funny and entertaining as he did, and he should not get arrested for impersonation. He howled with laughter as he got on his scooter, rode away and yelled, “Hi Ho Silver!”, a saying from the TV series, The Lone Ranger. Oh yes, I forgot to tell you that my husband, the sheriff rides a three wheeled scooter and carries a pistol.

I waited with baited breath for his phone call to tell me how things went.  I should have known a mere phone call wouldn’t be his style. As I was waiting and wondering, I suddenly heard a loud speaker outside the front door with a booming voice saying, “THIS IS THE SHERIFF OF TZFAT COME OUT WITH YOUR HANDS UP, YOU ARE UNDER ARREST!” There he was in his police car with another policeman and they were both howling with laughter. The guys at the station loved his new identity and thought it was totally cool. They asked if they could be his deputies. They wanted a deputy shirt and a hat and yes, a deputy badge because after all, they couldn’t be THE SHERIFF.  Due to popular demand to become one of his deputies, he had deputy stickers made. You can find them on car bumpers or restaurant doors in Tzfat and of course at the police station. Who knew?

One night we were at a local Tzfat restaurant, owned by an Israeli friend and the mayor of Tzfat came in to dine. My husband decided he had to go over and introduce himself…you guessed it…as the Sheriff of Tzfat. Of my gosh, I of course, thought he was crazy, and he is at some level, but yes, he went over and handed the mayor his card. The mayor jokingly said, “I didn’t know Tzfat had a Sheriff!” Then, our friend, the owner of the restaurant said, “Mayor, everyone knows the sheriff of Tzfat” and they all started laughing.

And so, I have the privilege of being married to the Sheriff of Tzfat and here are the lessons I learned from my husband, my greatest inspiration:

Israel is the land of possibilities, of dreams coming true, of miracles and wonders. It is our G-d given birthright which means, it aids us to become the all of who we are. The holiness and blessings embedded in the land link us to an inner dimension that causes us to align our inner yearnings with the outer manifestations. My husband, who is a bit of a character, manifested his inner desire that was longing for expression to be part of the nation. He combined his love of justice and helping (he was a lawyer in Denver) with his very humorous nature and created a unique expression of himself as a gift to the nation in the land. Extraordinary! The saga of the legend of the Sheriff of Tzfat is about reflecting upon what you can do for your country. It is not a superficial story of a man wanting to play cowboys and Indians but of a man who had the courage to tap into his inner longing and desire to make a contribution in his own unique way.

And so, my husband became the Sheriff of Tzfat and the fact that a stranger came to town (just like in the movies), unknown and with few Hebrew language skills and made himself the Sheriff is a true source of inspiration. His success at achieving his mission (one, I would have termed mission impossible) teaches us to believe in ourselves and also to go about our quest with a sense of fun and adventure. All is possible in the Holy Land…the Land flowing with milk and honey, i.e., nourishment and inspiration.

May we all merit the courage and stamina to fulfill our unique mission and not allow anything to stand in our way.  May we merit to deposit our unique talents and gifts in the soul repository of our nation: G-dhs Beloved Garden, the Holy land.

3 thoughts on “The Sheriff of Tzfat”