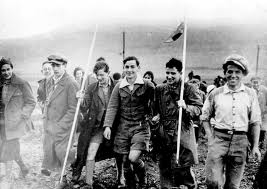 A few people challenged me to list 50 reasons to make aliyah. No problem. Here it is. Like I mentioned, from now on, I’ll be blogging at The Jewish Press, so after your daily fix at INN, if you want an injection straight into your veins, I’ll be sharpening my needles there.

2. To fulfill the Torah commandment to live in the Land of Israel.

3. To perform the mitzvot in the place they were meant to be performed, and not in a place where we do them as reminders, so that will still remember how to perform them when we return to the Land.

4. To live in the Land of our Forefathers.

5. To live in the Land of Prophecy.

6. To live in the Land that Hashem promised to the Jews.

7. To break free from being a despised stranger in gentile countries.

8. To escape gentile cultures and the spiritual pollution of the Diaspora, which clouds and distorts pure Jewish thinking and prayer.

9. To play a part in the ingathering of the exiles.

10. To play a part in Israel’s Redemption.

11. To play a part in the rebuilding of Jerusalem.

12. To actualize our daily prayers to return to Israel and thus be true to the words that I pray.

15. To live in a country according to the Jewish calendar.

16. To live in a country where the official language is Hebrew.

16. So my children won’t intermarry.

17. So my grandchildren won’t intermarry.

18. So my great grandchildren won’t intermarry.

20. To erase the Chillul Hashem of living in a foreign land, where the gentiles mock G-d, saying that He doesn’t have the power to keep His People in Israel.

22. To live in the place here prayer ascends to Heaven.

23. To live in the place of the Shechinah, the Land that Hashem watches over from the beginning of the year to the end.

24. To live in the Land where Avraham, Yitzhak, and Yaacov lived and are buried.

25. To live in the Land where every place I walk earns me a higher place in the World to Come.

26. So my children will grow up to be proud Jews.

27. So my children will grow up without dual identities and schizophrenic complexes.

28. Because Israeli women are the real thing, not trying to be like shiksas, and Israeli men aren’t teenagers who never grow up.

29. Because Israeli mothers still cook meals for the family.

30. Because there is more Torah in Israel than anywhere else in the world.

31. Because there are more Torah Gedolim in Israel than anywhere else in the world.

32. Because there are more frum communities in Israel than anywhere else in the world.

33. Because there are more yeshivot, heders, Talmud Torahs, religious colleges and schools for girls in Israel than anywhere else in the world.

34. Because the Kohanim bless the congregation each day.

35. Because of the extra mitzvot you can only do in the Land.

36. To become a bigger Jew, ready to give up “the good life” in the Diaspora in order to become a building of our Nation in our Land, even if it means sacrifice, rather than living a small solipsistic life motivated by my own personal interests and pleasures.

37. To live in a place where my taxes support yeshivot, Tzahal, Jewish charity organizations, terror victims, Jewish hospitals, the city of Jerusalem, the ingathering of the exiles….

40. To be in the place where the Jewish holidays are natural to the climate of the Land.

41. Because of the beautiful biblical scenery.

42. Because the food is great with the most delicious kosher pastries and cakes in the world.

43. Because you can get bagels there too.

44. Because radio broadcasts begin in the morning with “Shema Yisrael.”

45. Because of the modern apartments and fantastic villas.

46. Because of the thriving economy.

47. Because Israel’s an international leader in high-tech.

48. Because of the excellent medical care.

49. Because of the respect for the elderly.

50. Because that’s where I truly belong and where G-d wants me to be.

Is there something I missed?